When We Talk, They Listen 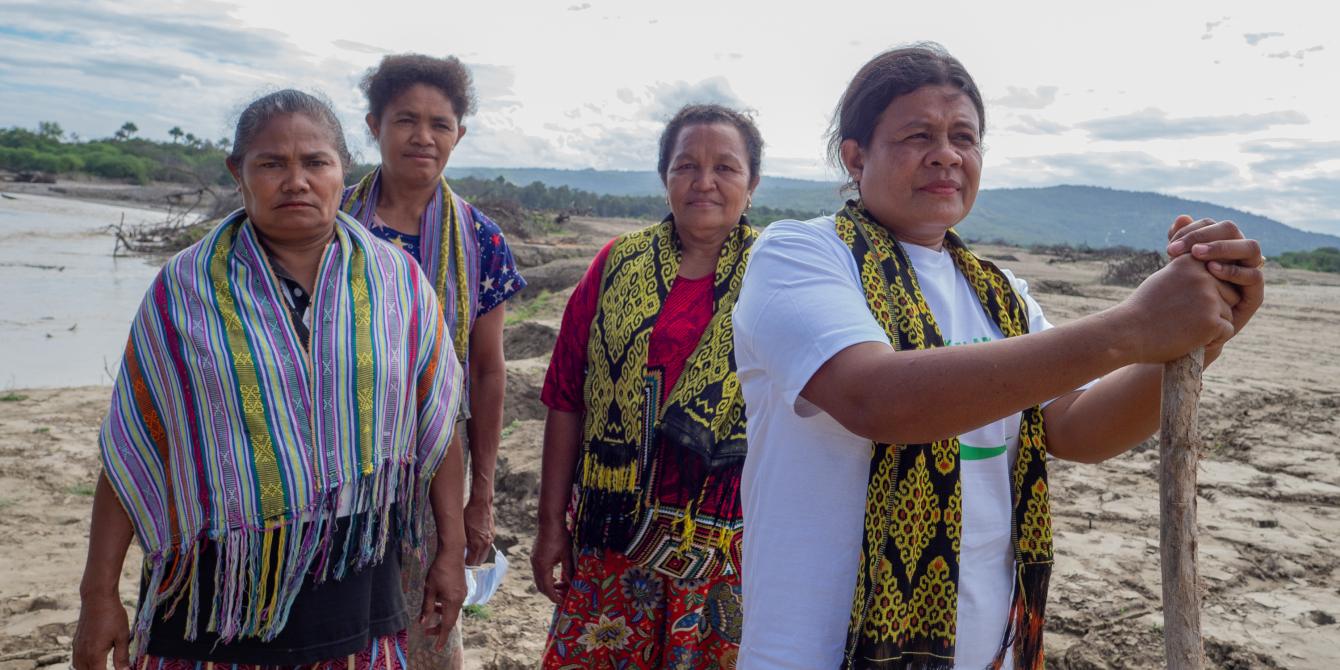 Guardians of their community. (left to right) Marice Nabuasa, Marica Ola, Marcelina Kause, and Femi Nautani stand near the river that often floods their village. Their women’s group is active in disaster management.

“In the past when it flooded, we only thought about rescuing ourselves,” says Marsalina Kause (second from right). “Now, we think about preparing the whole community.” Photo: Elizabeth Stevens

Imagine facing a fierce storm without a shelter or even a jacket to protect you. If the climate crisis were that storm, the people facing it without protection would be those whom poverty has deprived of every other option.

Like the residents of Bena, Indonesia, in the province of East Nusa Tenggara. To get to Bena, you climb for many miles up a steep, winding road that’s paved only to a point. Here, residents eke out a living as rice farmers and farm laborers and weavers but live at the mercy of the Noelmina River, which periodically overtops its banks and wipes out their livestock and belongings. Every flood is a body blow—especially for those who struggle every day to feed their families. And the inundations are becoming more severe and more frequent all the time.

The residents of Bena are facing the climate crisis with the same grit and ingenuity that enabled their ancestors to survive, but now they are getting a helping hand.

As part of a program known as ACT (Asia Community Disaster Preparedness and Transformation), Oxfam and partner CIS Timor (Circle of Imagine Society Timor) are working in Bena and two other communities to help residents reduce disaster risks that take the form of both floods and drought. We supported them to create disaster management committees to give residents a platform for communicating their needs and proposals to local and regional elected officials. We encouraged formation of youth and women’s groups to ensure that these important constituents have a voice in disaster management and other village affairs, and provided them with trainings on disaster management, women’s leadership, development planning, and other key issues.

And women are now stepping into leadership. For example, they monitor government communications about rainfall, track water levels in the nearby river Noelmina when it rains, and notify their community when a flood is imminent. “In the past when it flooded, we only thought about rescuing ourselves,” says Marsalina Kause, a member of the women’s group in Bena. “Now, we think about preparing the whole community.”

Communications run the gamut from WhatsApp—the platform the women use for communicating with the Meteorology and Climatology Department to koa—which means "screaming” in the local language of Dawan—the traditional method of sharing important news. “The river is full! The river is full!” someone shouts, and those who hear it pass on the message at the top of their lungs.

To reduce the risks that climate change poses to local agriculture, Oxfam and CIS Timor have also provided funding and technical support for the communities to develop three large gardens—irrigated demonstration plots cultivated by women and farm laborers that could serve as a model for drought-resistant farming. Women and the disaster management committees have played key roles in developing the plots, which in Benacomprises a50 X 70-meter parcel of land where residents are growing eggplant, water spinach, papaya, watermelon, pumpkin, and more. Up until now, people were only growing rice, explains Djaro; with help from CIS Timor and Oxfam, they are learning how to raise an array of fruits and vegetables, using organic methods.

The garden is hooked up to a water system that consists of a well, a pump, water tanks, and pipes, with tap stands and hoses set up within the garden for easy watering.

“Climate change is making rain unpredictable,” says farmer Imanuel Kause, “but with irrigation, we can still grow our crops.”

An important benefit of the irrigation system: it enables those who feel physically unable to haul water to participate.

Another benefit of the project: it’s fun. “We really enjoy working together,” says Mathias Nabunome. “In our rest time, we tell jokes and laugh, and tell stories from our lives.”

The floods may be worsening, but the outlook is improving in important ways. Febi Nautani is a woman who leads efforts to make local government more responsive to the needs of the village. “I feel the community is safer now,” she says. “When we talk, they listen.”